Jigsaw (South East) are delighted to announce the appointment of a new Patron. 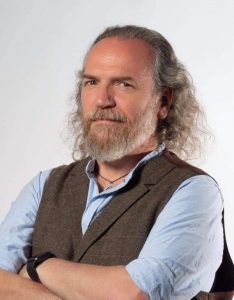 Celebrated Animator and Illustrator Gary Andrews joined Jigsaw as a new Patron in August 2021. Gary, who sadly lost his wife Joy in 2017, and has solo-parented since, used his creativity as self-counselling and now runs workshops and speaks about using creativity as a way to manage grief nationwide.

Gary comments; “I am delighted to join Jigsaw as a patron and to use my personal experiences and creative skills to help support this incredible charity. After Joy passed away, I was so grateful for the support that my children received. In my role as a digital ambassador and patron for Jigsaw, if I can help other families during their grief journey then I feel it’s a way for me to give a little back.”

Gary joins Sir Ed Davey MP as Patron. Ed, whose father died when he was four and his mother when he was just 15, has been a longstanding supporter of Jigsaw (South East) and active campaigner on bereavement rights for children, young people and their families.

In addition, we are pleased to announce that Dr Cecilia Hughes takes over the reins as Chair of Trustees, from the incredibly capable hands of exiting Chair, John Treharne. John was one of the initial Trustees and has expertly steered the charity from the early days of set up to where we are today and will remain with us as a Trustee.

Dr Hughes, based in Horley, is a retired Community Paediatrician who worked locally in Surrey for over 27 years with extensive experience in dealing with children and young people with additional needs, Including those who have been bereaved or suffered other losses. In addition, Dr Hughes was the Designated Medical Officer for Special Educational Needs and Disability for the Surrey collaborative Clinical Commissioning Groups which has given her a good understanding of the services available to support children and their families. She continues to be a multi-agency trainer for Surrey Safeguarding Children’s Board, keeping up to date with safeguarding issues.

Frank Sims, Charity Director of Jigsaw (South East) comments; “As a charity, we have grown significantly since we were established in 2012. We feel honoured to now welcome two incredible patrons in Gary and Ed who have sadly both experienced bereavement and understand the impact grief can have on children. Under the steer of Cecilia, our new Chair of Trustees, we have the expertise of her paediatric career and knowledge of the support children need at this difficult time in their lives. We still have a big job to do to meet the unmet need in our community as we know that there are over 1,000 children who lose a parent every year across Surrey and West Sussex, and we are committed to being here to support these children who need us now and in the future.”