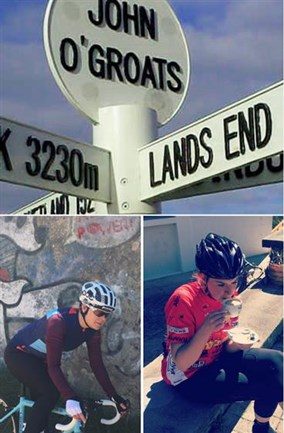 On Sunday Katharine (Kat) Wray and Becky Power will be setting off on an epic 1000 mile cycle from John O’Groats to Land’s End. The intrepid pair are raising money for Jigsaw (South East), a children’s bereavement charity based in East Grinstead.

Their ride has been inspired by the two young daughters of their cycling buddy, Mike Nolan. His wife, Dawn, 42, died from bowel cancer last year. “Mike’s bringing up Antonia and Francesca alone and he’s doing an amazing job,” Kat said.

“The girls have been so brave, and we wanted to support the charity that is helping them,” added Becky.

The duo aim to cover 100 miles a day over 10 days. Leigh based psychotherapist, Kat, says: “The training has been great. We’ve done some beautiful rides and because Becky knows all the best routes I haven’t had to do any planning!

“We  just want to get on our bikes now and we’re both really excited to see the Highlands. We’re also looking forward to eating anything we want due to the number of calories we’ll be burning!”

You can support Becky and Kat’s epic journey, which begins on August 18th 2019 here: https://www.justgiving.com/fundraising/katandbecjogle