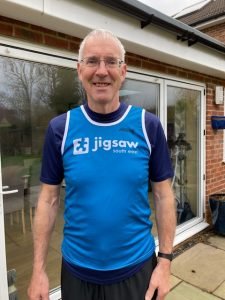 Nigel Golley, 60, will be running the Eastbourne Half marathon this March and raising vital funds for Jigsaw (South East).

Once a semi-professional footballer for Sutton United, Nigel says he’s “always been sporty”, but when he retired at football at the age of 43, he swapped his football boots for running trainers and it’s provided him with the perfect way to maintain his fitness.

Despite an injury that led to him pulling out of running the London Marathon previously, determined Nigel has not been deterred! He has since run a number of half marathons.

Nigel first heard of Jigsaw (South East) through our Trustee Sue Pegg and her husband Robin:

They are selfless people who do so many good things not only for the charity but outside of it, for their family and friends. I thought it was time to repay them for their kindness by raising funds for the charity that Sue helps.

I am aware of the good work that the charity does and the fact that over the last two years smaller charities have taken a considerable hit with fund raising due to the pandemic. Hopefully the money raised will not only help the charity to continue it’s great work but say a special thank you to Sue & Robin as well.

Having already raised an incredible £1800 for Jigsaw, we can’t thank Nigel enough for his ongoing support and we wish him all the best for the Half Marathon next month.

You can sponsor Nigel HERE.

fundraisingMarathon
Please spread the news and share this
Related Posts

“When you’ve lost a parent Father’s and Mother’s Day can be painful.”

"The first Father’s Day after my Dad’s death was so difficult. I found it very…

A big-hearted couple's fundraising effort has raised almost £4000 for our child bereavement charity, which…