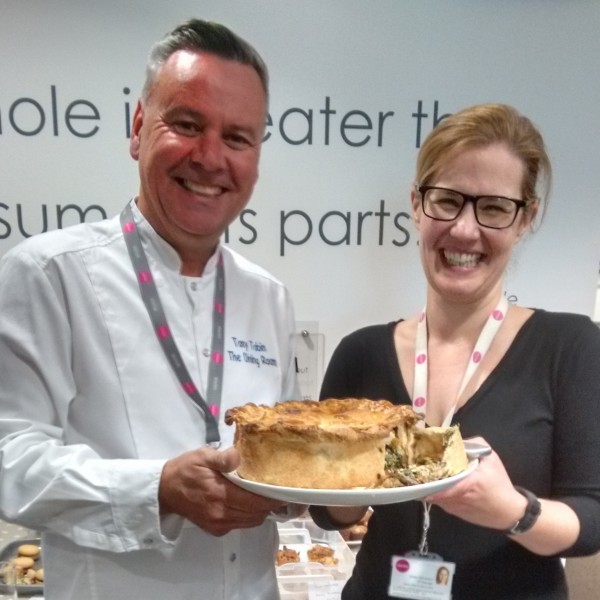 A construction firm based in Reigate has held a Bake Off today (Monday 3 October) in aid of its nominated charity for 2015-16, Jigsaw (South East), which supports bereaved children and young people and those facing the loss of a loved one through serious illness.

The competition invited keen cooks at the company’s head office to prepare savoury or sweet baked goods to be tasted and critiqued by celebrity chef and former Ready Steady Cook regular Tony Tobin.

The chef, who is also Patron of Jigsaw (South East), didn’t have to travel far for the event – he serves up local and seasonal British ingredients at his fine-dining establishment The Dining Room on Reigate High Street.

“I am really looking forward to judging the Bake Off and it’s great that Osborne are supporting such a great charity,” said Tony. “The work that Jigsaw do is fantastic and it is an honour to be involved with them.”

The winner of both Sweet and Savoury categories was Vickie Stevenson, Osborne’s ICT Manager, Property Services. She is a keen and regular baker and even made it through to the final 200 of BBC1’s Great British Bake Off three years ago. Her ‘picnic pie’ (pictured) came first in the Savoury category, while her salted caramel peanut butter brownies took the top spot in the Sweet category.

“We were delighted at the wide variety of entries into our Bake Off competition and would like to thank everybody for taking part. We would also like to thank our staff for their donations towards our nominated charity Jigsaw (South East). It was a fun event and we were honoured that Tony Tobin came along to judge the competition.”

“We were thrilled to have an opportunity to invite our wonderful Patron, the local restauranteur Tony Tobin, to a fundraising event organised by one of our biggest supporters. Osborne nominated us as their charity at the beginning of 2015 for the year and we were delighted that they continued to support us for 2016. They have all been tremendously supportive of Jigsaw and its work.”

Jigsaw (South East) supports children and young people across Surrey and West Sussex who have either lost a family member or who are preparing to lose a loved one because of a life-threatening illness. The charity runs its six-week Grief Support Groups in Reigate (and elsewhere) and the funds raised will be directly channelled into these vital support groups for grief-stricken families.

Double your donation for seven days