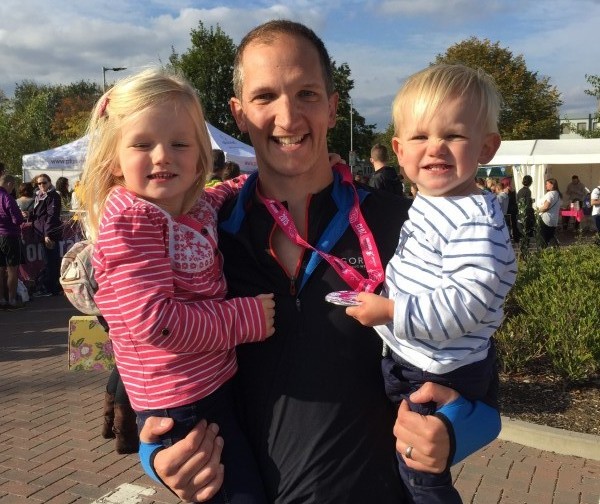 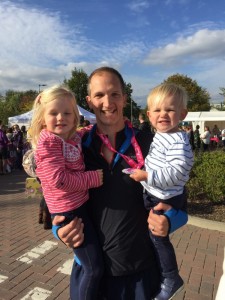 An East Grinstead father of two is training hard for a double marathon challenge this year in aid of Jigsaw (South East), which supports bereaved children and those facing the loss of a loved one through serious illness.

Pete Barlow, 37, is already well into his training for the Brighton Marathon later this month (17 April) but will have to maintain momentum for the challenging route of the Yorkshire Marathon on 9 October 2016.

Pete, who is originally from Yorkshire but now lives in East Grinstead with his wife and two small children aged 2 and 4, has run marathons in the past and finds running to be a great way to take a break from life’s demands.

“I’ve loved sport all my life and, as family and work commitments have grown, I’ve found running to be an amazing way to get out, take it all in and reflect,” said Pete.

After suffering the recent loss of his dad, Pete wanted to raise funds for a local charity.

“Bereavement is terrible and so is coping with illness of loved ones,” said Pete. “I lost my dad to a fatal heart attack in 2014. It was unexpected and it hit me harder than I accepted at the time. I look back and wish things were different but I’m old enough to move on quickly. For a child it’s much harder.”
Based at East Court Mansion in East Grinstead since 2006, the charity offers

“We are so grateful to the brave people that undertake such gruelling and at times painful physical challenges on behalf of Jigsaw. The physical and emotional pain of losing a loved one can be overwhelming and Jigsaw works hard to support families in grief or those facing terminal illness providing support through groups, one-to-one counselling and even advice at school. Without people such as Pete, we simply would not be able to continue our work.”

Support Pete HERE in his double marathon challenge for Jigsaw

Virtual Challenge for Ricky as he takes on the London Marathon in Kent!

"One of my best mates was adopted as a child, after both his parents died.…

Jigsaw (South East) welcomes the news that the team behind Nurse Ted books, which help…

A group of 14 runners, swimmers and cyclists are clocking up hundreds of miles in…