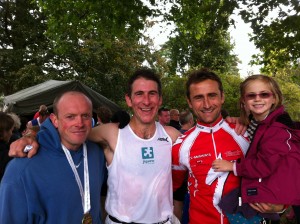 In its fourth year, the Hever Castle Triathlon drew 3,500 athletes from all across the country, including 800 children and a dedicated Jigsaw (South East) team

The grounds of Anne Boleyn’s former home provided the historic and scenic backdrop to the Markel Hever Castle Triathlon this September. Now in its fourth year, the event, which took place on Saturday 29th September, attracted 3,500 professional and amateur athletes including 800 children to make this the largest children’s triathlon in Europe.

Event sponsor Market offered a top prize of £5,000 to the winning team as well as iPads to each team member. And the Jigsaw team captain’s company, Make Software, kindly pledged to donate £500 if our team didn’t cross the finish line first and claim the top prize on our behalf.

The event raised a grand total of £1,500 for Jigsaw (South East), a locally based family bereavement charity that is dedicated to supporting children, young people and their families who have experienced grief, loss or trauma.

“All credit to all the athletes who participated in what must surely be a gruelling and at times painful physical challenge. The physical and emotional pain of losing a loved one can be overwhelming and Jigsaw works to support families in grief providing support through groups, one-to-one counselling and even advice at school.

“Without people such as Ralph, Tim and Rob – and the army of Jigsaw (South East) volunteers who gave up their weekend to help marshal the event – we simply would not be able to continue our work.”

Thanks to Ralph Hydes, Tim Muir and Rob Brown as well as to Make Software for their generous donation. Thanks also to all our volunteers for helping make the event such a success.

"Thank you Jigsaw for such a sensitively delivered, informative session on preparing for loss. Open…