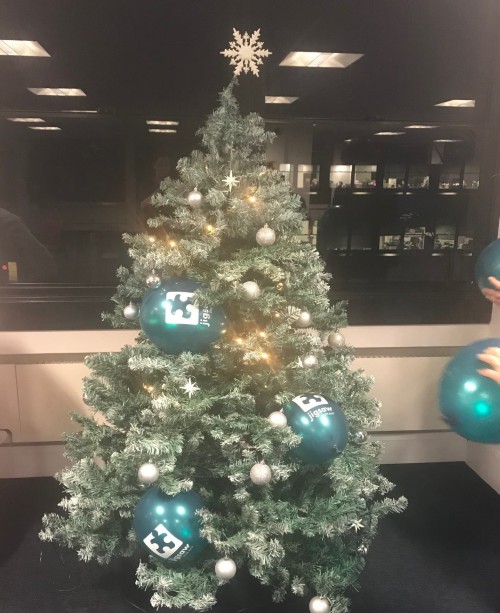 Almost £6,500 has been raised thanks to the sterling efforts of many locally based businesses and school communities

East Grinstead based child bereavement charity Jigsaw (South East) has received more than £6,500 from local schools and companies in Surrey and West Sussex thanks to a wide range of inventive fundraising efforts throughout the Christmas and New Year period.

During December 2017, four schools decided to donate funds raised through collections taken after their nativity performances. A total of more than £2,210 was raised by the following schools, which have worked with Jigsaw (South East) in the past:

Additionally, a number of local firms and organisations managed to raise £4,350 between them, either through one-off donations, collections or via their festive fundraising efforts.

Doves Barn Nursery in East Grinstead donated a percentage of the sale of every Christmas tree it sold; Paul James Jewellers in Oxted selected Jigsaw (South East) as its ‘charity of the year’; Christine Gardner Designs created beautiful Christmas cards, donating a percentage of every pack sold; the Caravan and Motorhome Club held collections at its head office and raffled some bottles of wine; publishers Faversham House organised a special Christmas fundraiser selling cakes, biscuits and mulled wine; Dal Nonno Italian Restaurant and Pizzeria in Crawley Down sold raffle tickets drawing winners on New Year’s Eve; East Grinstead’s St Swithun’s Church ran collections after nativity performances; a parent and toddler group at St Nicolas Church, Great Bookham, had a collection; the Meridian Women’s Institute based in East Grinstead donated money instead of sending Christmas cards; the Petroleum Women’s Club in London donated £150 after nominating us as their chosen charity at their Christmas Luncheon and, finally, Store 4 Biz gave a generous donation.

Sophie Bewley, Fundraising Coordinator for Jigsaw (South East) said: “We were completely staggered by the support we have had from the local community during Christmas and are so grateful to their wide-ranging fundraising efforts that encouraged people to give generously.

“As a small, independent charity that works across Surrey and parts of West Sussex, we receive no government support and are reliant upon donations and fundraising. This terrific amount will be a huge boost to our efforts to reach out to families going through the worst times of their lives.”