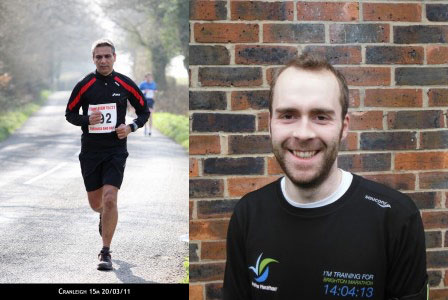 Mohan Mangroo (48) from South West London (pictured left) and Pete Cartwright (25) from Hove(pictured right) have both signed up to take part in the race, which starts with a loop of picturesque Preston Park and then takes in the best of the city centre, before heading east along the scenic coast road with views of the English Channel and South Downs.

“Having run the Brighton Half Marathon previously, it is a great area to run with a huge amount of spectator support,” says Mohan, who works for BT. “This, coupled with supporting a charity helping bereaved children and their families in my surrounding area, makes this very worthwhile.”

Pete Cartwright, who is originally from West Yorkshire but works for Challenge Packaging in Uckfield, is a local to Brighton, but has never untaken a physical challenge on this scale before.

“I’d be lying if I said I wasn’t just a tiny bit terrified, but excited all the same.” says Pete. “I’ve been very fortunate in my life not to have had to face those kinds of hardships [serious illness or bereavement] and I’m conscious I’m lucky so supporting Jigsaw and through it children who have not been as lucky as I have is definitely a cause worth putting myself through some pain for. It’s also local, which means that the money donated will make a genuine difference.”

Based at East Court Mansion in East Grinstead since 2006, the charity offers grief support to children and young people who have experienced the death of a significant family member through illness, accident, suicide or murder (through groups in Epsom, Reigate and soon Woking).

In partnership with Macmillan Cancer Support, it also provides support to children and young people who have a family member with a serious, life-limiting condition.

“We are so grateful to the brave people that undertake such gruelling and at times painful physical challenges on behalf of Jigsaw. The physical and emotional pain of losing a loved one can be overwhelming and Jigsaw works to support families in grief or those facing terminal illness providing support through groups, one-to-one counselling and even advice at school. Without people such as these we simply would not be able to continue our work.”

Tips for supporting your bereaved child this summer.

For parents and carers the summer holidays can be daunting, especially when you are grieving. Here…

The incredible swim squad from Ardingly Prep School dived right into their fundraising challenge! The…