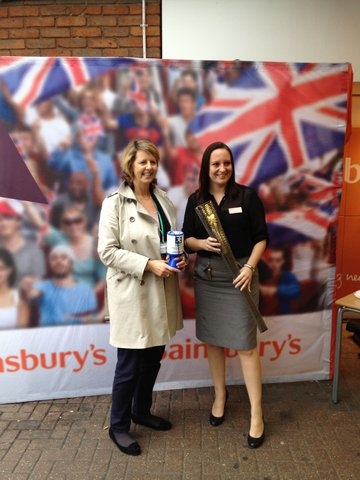 In June 2012, local bereavement charity Jigsaw (South East) was selected from a shortlist for worthy causes as the Redhill Branch of Sainsbury’s chosen charity for a year.

In a formal five-minute presentation, Jigsaw’s Grief Team Manager Nickey Price put the case for supporting Jigsaw (South East) forward to the supermarket’s employee panel. In doing so, she fought off the competition and secured this supermarket’s sponsorship for one year, as part of their commitment to supporting local charities.

“I had never had to do a pitch in this way before,” admitted Nickey. “But as soon as I began describing the work that we do with grieving families across Surrey and surrounds, I forgot my nerves and just got on with it.”

According to Louise Gregory, the Redhill branch’s HR Manager:

Already, the supermarket’s efforts have netted vital funds enabling the charity to continue supporting bereaved families in the local area.

In September, the store ran several in-store fundraising activities to engage customers and inform them about the work of Jigsaw (South East), including a ‘name the teddy’ competition and a chance to guess the number of sweeties in a jar. One brave Sainbury’s employee was even inspired to undertake a sponsored walk!

As autumn arrived, the branch issued a £150 Community Grant cheque that it had successfully applied for on behalf of the charity. This enabled the charity to have some promotional t-shirts printed to raise awareness at future fundraising events and will also provide a £10 gift voucher for every young person who has been through the groups this year.

Following on from the summer of sport, the Paralympic torch came to the Redhill store on Thursday 25th October 2012. Shoppers had the chance to pay to have their photo taken with it, with all proceeds going to the charity. Jigsaw (South East) also had an informative stand as well as collection tins outside the store – they even bumped into a family who had attended the Grief Support Groups three years ago.

Inspired by Halloween, the branch’s Bakery Manager created several giant jam-filled spider doughnuts, the sale of which went entirely to Jigsaw. They were clearly very popular, as this alone raised more than £100!

“We were thrilled to have been selected by the staff panel at Sainsbury’s in Redhill. They understood very quickly how valuable our work with grief-stricken families is in the local area.

“As a small charity, support from such a high-profile brand is really useful in not only raising our profile across the community, but also in raising valuable funds to enable us to continue working with children, young people and adults who have lost or are facing the loss of a loved one.”

With Christmas around the corner, the partnership between Jigsaw and Sainsbury’s will see several more fundraising activities taking place throughout the store including a sponsored bag-pack on Saturday 8th December, a charity book sale and more.

Calling all Home Heroes to join the 2.6 Challenge and support Jigsaw

The organisers of the London Marathon have created the 2.6 Challenge with the aim of…