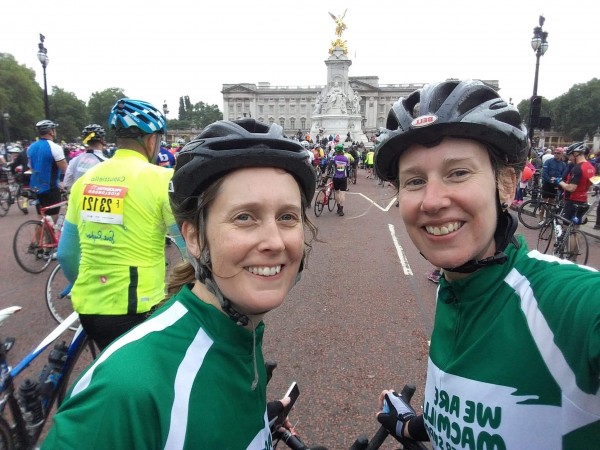 Two sisters from Cambridgeshire have signed up to a tough 100-mile cycle ride in memory of their friend and to raise funds for local charity Jigsaw (South East).

Heather Lay (41), an accountant, and Morven Langdon (39), a nurse, joined thousands of other cyclists on Sunday 29 July at the start line at Queen Elizabeth Olympic Park, before following a 100-mile route on closed roads through the capital and out into rural Surrey, finishing on The Mall in central London. The sisters wanted to use the opportunity to remember and honour their friend Vicki Bullock who, aged just 43, lost a bravely fought battle with cancer in autumn 2017 leaving behind a son and partner.

“Ride London was an truly amazing experience and we completed it in a total of 7.37 which included our stops so we are really pleased as it was a tough wet and windy ride. We had soggy socks within 5 miles! It was wonderful to see some of the London sights as we sped past and finishing on the Mall, seeing all the crowds and meeting our families was wonderful and very emotional. We feel totally overwhelmed by the support we’ve received from our friends, family and people we don’t even know.

“Jigsaw (South East) has been supporting a family who are very good friends of ours – Mark, Vicki and Josh Bullock (6) and we would very much like half our sponsorship to go to the charity in Vicki’s memory [the other half will go to Macmillan]. I struggle to put into words how devastating news of Vicki’s illness and journey through her treatment and illness was. She, Mark and Josh are very important people in our lives and Vicki is greatly missed.” 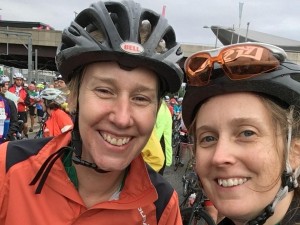 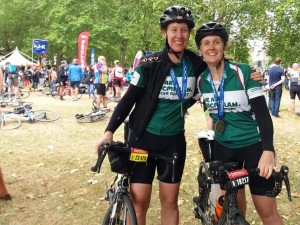 The sisters are both keen cyclists and put in lots of training ahead of the ride which followed a route made famous by the world’s best cyclists at the London 2012 Olympics.

“We were delighted to see that Heather and Morven had safely and successfully completed Ride London particularly as the weather was so bad. We are so grateful that they selected Jigsaw (South East). As a small, local charity, we are hugely dependent upon donations and funds raised by brave and inspiring individuals like Heather and Morven. These funds enable us to continue reaching out and supporting families who are facing the devastating loss of a loved one through serious, life-threatening illnesses.”

Based at East Court Mansion in East Grinstead since 2005, Jigsaw (South East) offers

support to children and young people who have a family member with a serious, life-limiting condition. It also provides grief support to children and young people in Surrey and parts of West Sussex who have experienced the death of a significant family member through illness, accident, suicide or murder (through groups in Reigate and Guildford and East Grinstead).

Supporting Jigsaw with all the White Stuff