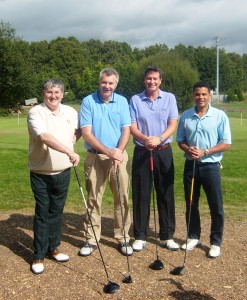 The Jigsaw (South East) charity golf tournament, now in its third year, once again attracted some fierce competition as well as a former England football player

Nine teams of four participated in the annual charity golf tournament sponsored and organised by UBM – business printer and photocopier suppliers. And the special guest this year was former England footballer and Sky Sports correspondent John Salako, who joined UBM’s team and presented a charity auction.

The event took place on Friday 14th September 2012 at Horne Park Golf Club in South Godstone, Surrey. And if the competition wasn’t hotting up enough, a local BWM showroom pledged to provide a soft-top Mini to anyone who could achieve a hole-in-one on the eighth hole, a goal that was sadly not reached on this occasion.

Once all the teams had completed their rounds on this 18-hole course, it was on to the Clubhouse for some refreshments and a charity auction, with the top prize the chance to spend the day in the Sky Sports studio with Mr Salako during a premiership football match.

Well done to the winning team from UBM – Colin Cornhill, John Salako, Ron Smith and Gary Doors. And congratulations to all the winners who bid in the auction.

“A big thank you to all the amateur golfers who turned up and gave their support to our local charity – without people like you we simply would not be able to continue to provide support to bereaved families across Surrey and surrounding towns.

“It was great to have such a high-profile sportsman in the form of ex-England footballer John Salako joining in the event. John is a great sport and did a great job running the charity auction, as well as donating a top prize to spend a day with him presenting a premiership football match.”

Thanks to the organisers

Colin Cornhill and Terry Woods of UBM. The company, which supplies business printers and copiers, has been a stalwart supporter of Jigsaw (South East) for several years.

Why Ria’s still running the London Marathon in October, just not in London!

Couple’s Marathon effort for campaigning Mum who died from cancer

In 2014, a week after her second son was born prematurely, Ceri Weston was diagnosed…

“I was nine when my father died. I attended the Jigsaw family group sessions with…