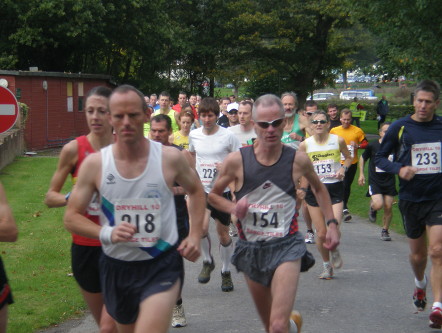 The Lingfield Dry Hill 10 is a ten-mile multi-terrain race through a scenic, rural south east corner of Surrey. This year, it took place on Sunday 1stst Sept 2013 and attracted nearly 150 runners from all over the country, many of whom were sponsored by friends and family to complete the run, raising a grand total of £500. Half the profit from the race is donated to local charities and the other half is used to support the running club.

“In the past, we have given donations to well known local charities such as Young Epilepsy (at St Piers School in Lingfield), Heatherley Cheshire and St Catherine’s Hospice. This year, we thought it would be nice to look for some less well known, and potentially less well funded, ones. So we opened it up to members and Sarah Muir [a Grief Support Worker at Jigsaw (South East)], a member of the club, suggested Jigsaw. The fact that Jigsaw works with children was certainly a contributing factor.”

“We were thrilled to have been selected by Lingfield Running Club as the nominated charity for their Dry Hill 10 Race. £500 will go a long way in ensuring we reach grief-stricken families as well as those who are facing terminal illness throughout Surrey and Sussex.

“As a small charity, support from committed local groups such as Lingfield Running Club is absolutely crucial in not only raising our profile across the community, but also in raising essential funds to enable us to continue our invaluable work with children, young people and adults who have lost or are facing the loss of a loved one.”

A running success for local charity