Laura Grace and her children. Photo by Mark Fazey

“Telling my children their father had died was the most heart-breaking thing I have ever had to do,” says Laura Grace.

The mother of four from Ashford, Surrey, is now running to raise money for the East Grinstead based bereavement charity that has helped her children since their father/ step father’s sudden death in 2018.

The childminder and beauty technician is taking part in the Staines 10K, on Sunday 12th May – National Children’s Day UK – to fundraise for Jigsaw (South East), which offers grief support to children and young people.

“We were reeling with shock when it happened,” said Laura. “Jigsaw has been wonderful. Someone is always on the end of the phone. They‘ve led me to brilliant resources and have run workshops, which have helped the children during this difficult time.”

Laura has already exceeded her initial aim of raising £500 for the charity. She says that preparing for the run in May has become a family event: “10 kilometres might n 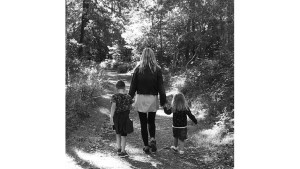 ot be far for an athlete, but it’s a first for me. The kids have been keeping me company, by cycling alongside whilst I run.”

The focus has also led to other benefits for Laura. “Training for the 10K has definitely helped my mental health,” she said.

“We cannot thank Laura enough. We are a small charity carrying out vital work with children, young people and their families at a time when they are at their most vulnerable. Laura’s family has direct experience of our support and we thank her taking on this challenge to help us continue this important work,” she said.

You can sponsor Laura via her JustGiving page: Support Laura Grace’s Run for Jigsaw

#FabFour to take on Brighton marathon