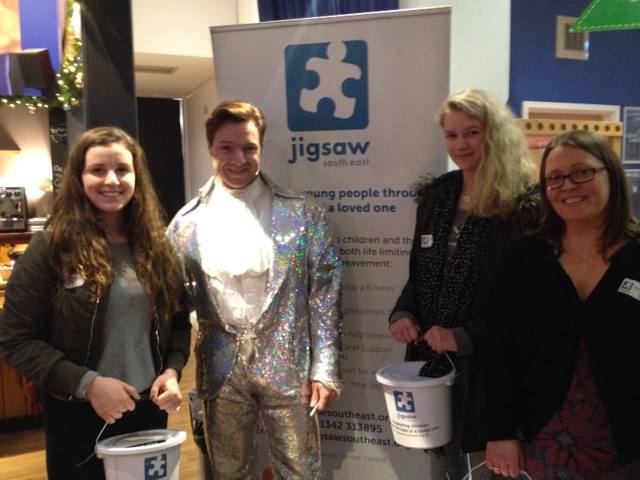 This fantastic amount was raised by audience collections after every performance of the Christmas pantomine Snow White and the Seven Dwarves, which starred comedian Drew Cameron and was produced by That’s Entertainment Productions.

“Every year Chequer Mead chooses to support a charity as the recipient of our retiring collection after each performance of our pantomime. This year we chose Jigsaw as a local charity who do such fantastic work with children and young people experiencing the problems and difficulties surrounding illness and death of family members. It was a pleasure to be able to help financially and also offer some families the opportunity to experience the pantomime first hand.”

“We are thrilled to have been selected by Chequer Mead Manager Pete Jenkins as the lucky recipients of their fundraising collections throughout pantomime season – and we wish to extend our gratitude to all the generous individuals who stopped to chat to our army of volunteers shaking collecting buckets after a total of 19 performances. This money will give a significant boost to our work with grief-stricken families as well as those who are facing terminal illness throughout Surrey and Sussex.”

Shimmy into your Glad Rags and beat the January Blues

Revisit the Roaring 20s speakeasy style, next month, for a night of fundraising, dancing and…